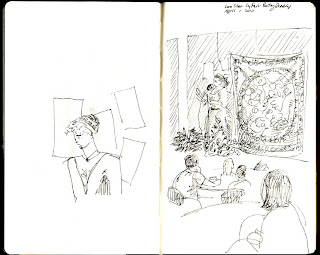 Recently, students performed a Poetry Slam at Lone Star College-CyFair campus, where I teach. This is the first time I sketched from a constantly changing room of diverse people and diverse moods. In life-drawing classes, the change of a model's pose is expected and predictable—here, movements were erratic and sudden. Without warning a poet would finish their piece and a new voice would be called to perform.
Unfortunately, from a sketch-perspective, the room stood out as a typical conference area: bland walls, dull colors, little decor. Fortunately the improvised stage did have a dark purple fabric backdrop with a basic circle print of interlocking curves and circles. Likewise, posters from previous slams were pinned to the wall as well to give a more "bohemian" appearance.

The two students I drew were selected at random; the male figure because I admired his cap: wrinkled lines and a row of odd-shaped circles. His shock of hair pulled out from under, as if struggling to free itself from the confines of the fabric. The female figure, on the other hand, I wanted to capture the print pattern in her dress, a dominant image of a branch of flowering orchids, then a menagerie of blossoms slowly covering the hemline, shifting the dress into a new color tone. The dress merged with the plants arranged in front of the stage, blurring her form at the base.
Labels: ink drawing Micron pens Moleskine sketchbook 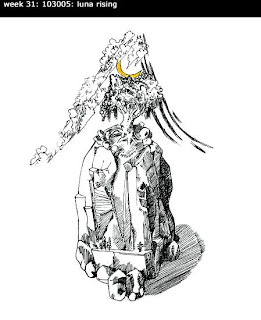 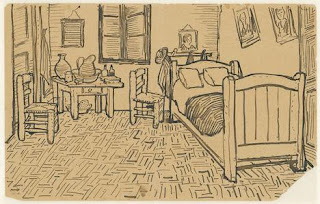 David-Glen Smith
Primarily a Poet and a Father of a young boy.

• My first manuscript of poetry Variations on a Theme of Desire was published in 2015 by Saint Julian Press.

• Currently, I am developing new(er) poems for new(er) manuscript.

For a creative and occasional outburst, visit: @river_fractured

A Gathering of Stones